Stop me if you’ve heard this one…

Two windmills are standing in a field.

One asks the other, “What kind of music do you like?”

I used to be in a band called “Sold Out”.

Our gig posters looked great, but no-one ever came.

The snake MIGHT have been on his way to a paying gig.

What do you call a gingerbread man with one leg bitten off?

What is the most musical part of your body?

Your nose because you can blow and pick it.

What did Jay-z call his wife before they got married?

How do you turn a duck into a soul singer?

Put it in the microwave until it’s Bill Withers.

Why do fluorescent lights hum?

Because they forgot the words.

Me and my friends are in a band called “Duvet”.

How many indie hipsters does it take to change a light bulb?

It’s an obscure number, you probably haven’t heard it.

What do you get when you drop a piano down a mine shaft?

What do you get when you drop a piano on an army base?

It keeps playing “Someone Like You” on a loop.

I think it’s a Dell.

What kind of music are balloons afraid of?

With the rise of self-driving vehicles, it’s only a matter of time before we get a country song where a guy’s truck leaves him too.

What do hip-hop muscians put on their cuts and grazes ?

Me and some friends have just formed a band.

We haven’t got a gig yet…

My neighbors are listening to great music.

What’s brown and sitting on a piano bench?

I was given the worst Christmas present ever – a Bonnie Tyler sat nav.

It keeps telling me to turn around, and every now and then it falls apart.

What is a Jehovah’s Witness’ favorite band?

How do you fix a broken brass musical instrument?

With a tuba glue.

When my girlfriend said she was leaving me because of my obsession with the Monkees, I thought she was joking.

But then I saw her face.

What was stolen from the music store when it was robbed?

Why couldn’t the string quartet find their composer?

What do vegetarians order at a soul food restaurant?

The Ike and Tina Tuna.

Did you hear about that music composer who committed suicide?

He didn’t even leave a note.

What happens when you play Beethoven backwards?

The first row of a country concert.

Why does Snoop Dogg carry an umbrella?

Whats the definition of Endless Love?

Rick Astley will let you borrow any movie from his collection of Pixar films except one.

He’s never going to give you Up.

Because he was Baroque.

My girlfriend left me because of my obsession with Linkin Park.

But in the end, it doesn’t even matter.

How do you find Will Smith in the snow?

Look for the fresh prints.

Why did the pianist keep banging his head against the keys?

He was playing by ear.

I fainted in the curry house when I heard REM had split up.

That’s me in the Korma.

Middle C, E flat and G walk into a bar.

Why did Bono fall off the stage?

He was too close to The Edge.

How many folk singers does it take to change a light bulb?

Six. One to change it and five to sing about how good the old one was.

What do you call a musician with problems?

When asked who he was going as, he replied, “I’ll be Bach.”

Where did the music teacher leave her keys?

Why did Bach have so many children?

Because he didn’t have any organ stops.

What does new age music sound like played backwards?

How do you make a bandstand?

Take away their chairs.

Why do fluorescent lights hum?

Because they forgot the words.

“Let me be clear about this: I don’t have a drug problem; I have a police problem.”
Keith Richards

“A gentleman is someone who knows how to play the banjo – and doesn’t.”
Mark Twain

“Get up from that piano. You hurtin’ its feelings.”
Jelly Roll Morton

“I don’t have a drinking problem, ’cept when I can’t get a drink.”
Tom Waits

“I used to jog but the ice cubes kept falling out of my glass.”
Dave Lee Roth, Van Halen

“When she started to play, Steinway came down personally and rubbed his name off the piano.”
Bob Hope

“If life was fair, Elvis would be alive and all the impersonators would be dead.”
Johnny Carson

“Somebody just gave me a shower radio. Thanks a lot. Do you really want music in the shower? I guess there’s no better place to dance than a slick surface next to a glass door.”
Jerry Seinfeld

“I wrote a song, but I can’t read music so I don’t know what it is.”
Steven Wright

“I play all the right notes, but not necessarily in the right order.”
Eric Morecambe

“I play all my country and western music backward – your lover returns, your dog comes back and you cease to be an alcoholic.”
Linda Smith 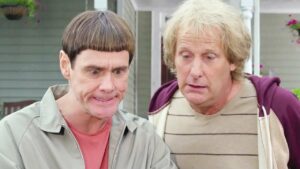