A Month of Blues History
February 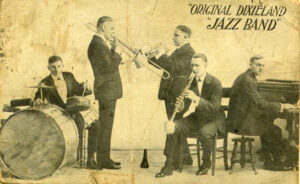 February 26, 1917 – 1st Jazz records recorded – “Dixie Jazz Band One Step” and “Livery Stable Blues” by Original Dixieland Jass Band for the Victor Talking Machine Company. (No that’s not a typo – it was originally spelled “jass” and not “jazz”.) 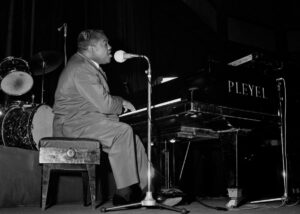 One of the pioneers of rock and roll music, Domino sold more than 65 million records. Between 1955 and 1960, he had eleven Top 10 hits. His humility and shyness may be one reason his contribution to the genre has been overlooked.

During his career, Domino had 35 records in the U.S. Billboard Top 40, and five of his pre-1955 records sold more than a million copies, being certified gold.[5] His musical style was based on traditional rhythm and blues, accompanied by saxophones, bass, piano, electric guitar, and drums. His 1949 release “The Fat Man” is widely regarded as the first million-selling rock and roll record. His two most famous songs are “Ain’t That A Shame” and “Blueberry Hill”. 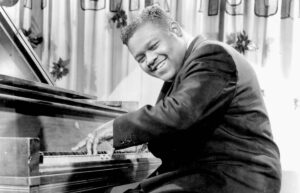 Antoine Domino Jr. was born and raised in New Orleans, Louisiana, the youngest of eight children born to Antoine Caliste Domino (1879–1964) and Marie-Donatille Gros (1886–1971). The Domino family was of French Creole background, and Louisiana Creole was his first language.

Antoine was born at home with the assistance of his grandmother, a midwife. His name was initially misspelled as Anthony on his birth certificate. His family had recently arrived in the Lower Ninth Ward from Vacherie, Louisiana. His father was a part-time violin player who worked at a racetrack. He attended Howard University, leaving to start work as a helper to an ice delivery man. Domino learned to play the piano in about 1938 from his brother-in-law, the jazz guitarist Harrison Verrett.

The musician was married to Rosemary Domino (née Hall) from 1947 until her death in 2008; the couple had eight children: Antoine III, Anatole, Andre, Antonio, Antoinette, Andrea, Anola, and Adonica. Even after his success he continued to live in his old neighborhood, the Lower Ninth Ward, until after Hurricane Katrina, when he moved to a suburb of New Orleans.

February 3, 1937 – Johnny ‘guitar’ Watson, American blues guitarist, singer was born this day. His ferocious ‘Space Guitar’ single of 1954 pioneered guitar feedback and reverb. Watson died on 17th May 1996 while on tour in Yokohama, Japan. According to eyewitness reports, he collapsed mid-guitar solo. His last words were “ain’t that a bitch”.

February 1, 1965 – At the Arthur Smith Studios in Charlotte, North Carolina, James Brown recorded ‘Papa’s Got A Brand New Bag’, which will reach No.8 on the Billboard Pop chart and No.1 on the R&B chart the following August and later win a Grammy Award for Best Rhythm and Blues Recording.

February 1, 1972 – Chuck Berry had his first UK No.1 single with a live recording of a song he’d been playing live for over 20 years ‘My Ding-a-Ling’. UK public morality campaigner Mary Whitehouse attempted to have the song banned due to its innuendo-laden lyrics. The Average White Band members guitarist Onnie McIntyre and drummer Robbie McIntosh played on the single.