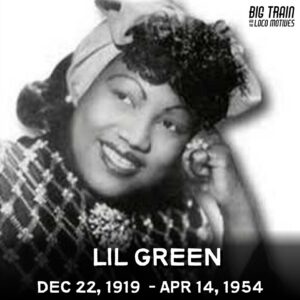 HEY LOCO FANS – Happy B’Day to the beautiful Chicago blues singer and songwriter Lil Green born this day in 1919. She was among the leading female rhythm and blues singers of the 1940s, with a sensual soprano voice.

Born Lillian Green or Lillie May Johnson, she was born in Mississippi, although no specific location is specified. Even the year of her birth is in dispute – some sources list it as 1901 or 1910.

After the early deaths of her parents, she began performing in her teens and, having honed her craft in the church performing gospel, she sang in Mississippi jukes, before heading to Chicago, Illinois, in 1929, where she would make all of her recordings. Green was noted for her superb timing and a rich and sinuous voice.

She was about 18 when she recorded her first session. In the 1930s she and Big Bill Broonzy had a nightclub act together.

Her two biggest hits were her own compositions. This included “Romance in the Dark”, which was later covered by many artists, such as Dinah Washington and Nina Simone. Green’s 1941 version of Kansas Joe McCoy’s minor-key blues- and jazz-influenced song “Why Don’t You Do Right?”, was covered by Peggy Lee in 1942 and many others since. As well as performing in Chicago nightclubs, Green toured with Tiny Bradshaw and other bands but never broke away from the black theatre circuit.

By 1949, Green had changed direction with the foresight to become a jazz vocalist and tried to emulate the Jazz style of Billie Holiday. Her health was failing when she signed with Atlantic Records in 1951, and she died of pneumonia in Chicago in 1954.

She is buried in Oak Hill Cemetery, in Gary, Indiana.

In the dark it’s just you and I
Not a sound, there’s not one sigh
Just the beat of my poor heart
In the dark

Lil Green – “Romance In The Dark” 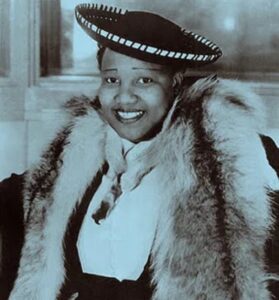