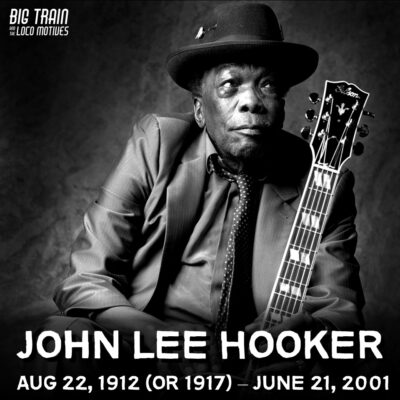 John Lee Hooker was an American blues singer, songwriter, and guitarist. The son of a sharecropper, he was beloved worldwide as the king of the endless boogie, a genuine blues superstar whose droning, hypnotic one-chord grooves were at once both ultra-primitive and timeless. But John Lee Hooker recorded in a great many more styles than that over a career that stretched across more than half a century. “The Hook” was a Mississippi native who became the top gent on the Detroit blues circuit in the years following World War II. 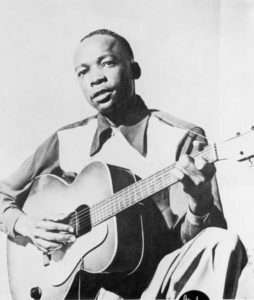 It is believed that he was born in Tutwiler, Mississippi, in Tallahatchie County, although some sources say his birthplace was near Clarksdale, in Coahoma County. He was the youngest of the 11 children of William Hooker (born 1871, died after 1923), a sharecropper and Baptist preacher, and Minnie Ramsey (born c. 1880, date of death unknown). In the 1920 federal census, William and Minnie were recorded as being 48 and 39 years old, respectively, which implies that Minnie was born about 1880, not 1875. She was said to have been a “decade or so younger” than her husband, which gives additional credibility to this census record as evidence of Hooker’s origins.

The Hooker children were homes-schooled. They were permitted to listen only to religious songs; the spirituals sung in church were their earliest exposure to music. In 1921, their parents separated. The next year, their mother married William Moore, a blues singer, who provided John Lee with an introduction to the guitar (and whom he would later credit for his distinctive playing style). 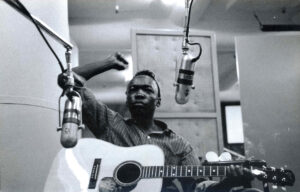 Moore was his first significant blues influence. He was a local blues guitarist who, in Shreveport, Louisiana, learned to play a droning, one-chord blues that was strikingly different from the Delta blues of the time.

Another influence was Tony Hollins, who dated Hooker’s sister Alice, helped teach Hooker to play, and gave him his first guitar. For the rest of his life, Hooker regarded Hollins as a formative influence on his style of playing and his career as a musician. Among the songs that Hollins reputedly taught Hooker were versions of “Crawlin’ King Snake” and “Catfish Blues”.

At the age of 14, Hooker ran away from home, reportedly never seeing his mother or stepfather again. In the mid-1930s, he lived in Memphis, Tennessee, where he performed on Beale Street, at the New Daisy Theatre and occasionally at house parties.

He worked in factories in various cities during World War II, eventually getting a job with the Ford Motor Company in Detroit in 1943. He frequented the blues clubs and bars on Hastings Street, the heart of the black entertainment district, on Detroit’s east side. In a city noted for its pianists, guitar players were scarce. Hooker’s popularity grew quickly as he performed in Detroit clubs, and, seeking an instrument louder than his acoustic guitar, he bought his first electric guitar. 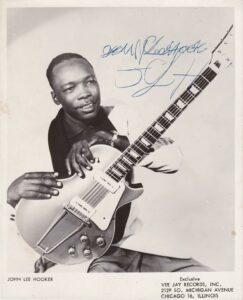 Hooker was working as janitor in a Detroit steel mill when his recording career began in 1948, when Modern Records, based in Los Angeles, released a demo he had recorded for Bernie Besman in Detroit. The single, “Boogie Chillen'”, became a hit and the best-selling race record of 1949. Despite being illiterate, Hooker was a prolific lyricist. In addition to adapting traditional blues lyrics, he composed original songs. In the 1950s, like many black musicians, Hooker earned little from record sales, and so he often recorded variations of his songs for different studios for an up-front fee. To evade his recording contract, he used various pseudonyms, including John Lee Booker (for Chess Records and Chance Records in 1951–1952), Johnny Lee (for De Luxe Records in 1953–1954), John Lee, John Lee Cooker, Texas Slim, Delta John, Birmingham Sam and his Magic Guitar, Johnny Williams, and the Boogie Man.

His early solo songs were recorded by Bernie Besman. Hooker rarely played with a standard beat, but instead he changed tempo to fit the needs of the song. This often made it difficult to use backing musicians, who were not accustomed to Hooker’s musical vagaries. As a result, Besman recorded Hooker playing guitar, singing and stomping on a wooden pallet in time with the music.

For much of this period he recorded and toured with Eddie Kirkland. In Hooker’s later sessions for Vee-Jay Records in Chicago, studio musicians accompanied him on most of his recordings, including Eddie Taylor, who could handle his musical idiosyncrasies. “Boom Boom” (1962) and “Dimples”, two popular songs by Hooker, were originally released by Vee-Jay. 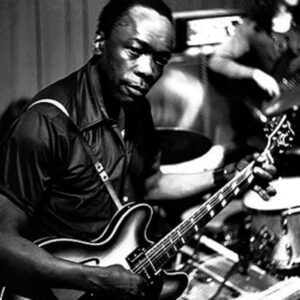 Beginning in 1962, Hooker gained greater exposure when he toured Europe in the annual American Folk Blues Festival. His “Dimples” became a successful single on the UK Singles Charts in 1964, eight years after its first US release. Hooker began to perform and record with rock musicians. One of his earliest collaborations was with British blues rock band the Groundhogs. In 1970, he recorded the joint album Hooker ‘n Heat, with the American blues and boogie rock group Canned Heat, whose repertoire included adaptations of Hooker songs. It became the first of Hooker’s albums to reach the Billboard charts, peaking at number 78 on the Billboard 200. Other collaboration albums soon followed, including Endless Boogie (1971) and Never Get Out of These Blues Alive (1972), which included Steve Miller, Elvin Bishop, Van Morrison, and others.

Hooker appeared in the 1980 film The Blues Brothers. He performed “Boom Boom” in the role of a street musician. In 1989, he recorded the album The Healer with Carlos Santana, Bonnie Raitt, and others. The 1990s saw additional collaboration albums: Mr. Lucky (1991), Chill Out (1995), and Don’t Look Back (1997) with Morrison, Santana, Los Lobos, and additional guest musicians. His re-recording of “Boom Boom” (the title track for his 1992 album) with guitarist Jimmie Vaughan became Hooker’s highest charting single (number 16) in the UK. Come See About Me, a 2004 DVD, includes performances filmed between 1960 and 1994 and interviews with several of the musicians. 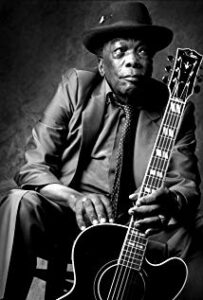 Hooker died in his sleep on June 21, 2001, in Los Altos, California in his home. He is interred at the Chapel of the Chimes in Oakland, California. He was survived by eight children, 19 grandchildren, and numerous great-grandchildren.

On June 25, 2019, The New York Times Magazine listed John Lee Hooker among hundreds of artists whose material was reportedly destroyed in the 2008 Universal fire. 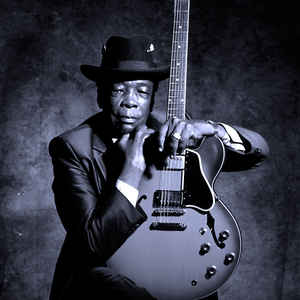